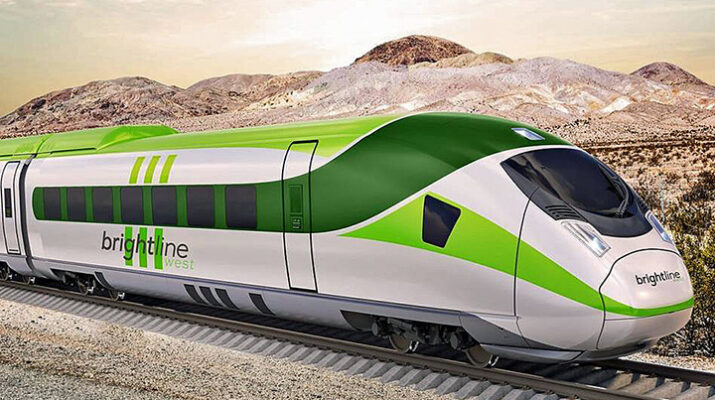 The high-speed rail system between Las Vegas and Southern California is now awaiting bond sales.  Additional details have been released by Brightline Holdings, the developer, indicating that the long awaited high speed rail system is going to become a reality.  Named "Brightline West,"  new details released detailed timelines on the construction.
Brightline West is a 260-mile high-speed rail system designed to take cars off the road and offer millions of travelers an eco-friendly way to travel between Los Angeles, one of the country’s largest cities, and Las Vegas, the entertainment capital of the world.
Plans revealed on the now-branded Brightline West project’s recently launched website show work on the rail line is expected to begin this year, 2020, and wrap up in the first half of 2024.
Nevada would see 34 miles of track running along Interstate 15 from state line to the Brightline West station on the south end of the Las Vegas Strip. The proposed station location being in the vicinity of the Allegiant Stadium.
A 39-mile portion stretches from the Victorville Station to just south of Barstow, California, with construction slated to begin at the end of this year. A 45-mile segment will run from just outside Barstow to Baker, California, and a 51-mile segment will go from near Baker to the Nevada state line. Construction on both is planned to begin in the second quarter of 2021. The state line to Las Vegas segment is slated to kick off at the end of the year, 2020..
Work on an additional portion between Victorville and Rancho Cucamonga, California, is tentatively slated to begin in the third quarter of 2021 and wrap up in early 2024. This connection will allow Brightline West passengers to continue on into Los Angeles via the Metrolink, thus linking L.A. and Las Vegas.
The Rancho Cucamonga connection is the final piece in connecting Los Angeles and Las Vegas.