Oakland Searching for a Pot of Gold in Las Vegas.

Oakland Athletics brass returned to Southern Nevada this week to continue their search for a site for a Major League Baseball Stadium.  The Oakland Athletics are fully aware of the $1 billion increase in value the Raiders experienced  moving to Las Vegas and hope to reap some of the same benefits.
Team owner John Fisher and president Dave Kaval plan to be in the Las Vegas Valley Wednesday through Friday, a team spokesperson confirmed Tuesday.
It will mark the fifth time team representatives have been in the area as they explore possible relocation from Oakland. MLB officials gave the A’s permission to explore moving to Las Vegas three months ago, following snags in the process to get a new stadium project going in Oakland.
The A’s and the Oakland City Council have been discussing a $1 billion, 30,000-seat ballpark at the Port of Oakland’s Howard Terminal. Late last month, the city council approved its proposal for a ballpark but the A’s found the offer unacceptable. Negotiations between the two sides have resumed in an attempt to bridge their differences.
This week’s trip will include a variety of meetings and site searches — as the A’s have done in the past — for a proposed 30,000-seat stadium here. After the group’s fourth trip in July, Kaval said the team had over 20 potential sites on its list.
That list appears to have grown: The team has interest in a site on Las Vegas Boulevard and Warm Springs Road next to the planned Brightline West high-speed train station. It would be accessible from Interstate 15 at Blue Diamond Road, the 215 Beltway at Las Vegas Boulevard or Warm Springs and be a few miles away from the south end of the Las Vegas Strip and McCarran International Airport.
That proximity to McCarran would require further evaluation from the airport and Federal Aviation Administration, according to Chris Jones, airport spokesman.
Oakland is looking for a “Sweetheart Deal Similar to the one reached by the Raiders. The Raiders team value increased by $1 billion moving to Las Vegas.
The Alameda County Board of Supervisors may have thrown a wrench into the Oakland A’s plan to build a waterfront ballpark by declaring it’s not ready to accept a funding plan the team says is key to making the project happen. Following long and contentious meetings, the supervisors said they won’t even schedule a vote until September on Oakland’s request that the county support the idea of forming a tax district to finance the infrastructure needed for a ballpark and the mixed-use development that eventually will surround it.
Oakland officials asked the supervisors to sign off by the end of August on creating a tax district because the City Council on July 20 is scheduled to discuss the A’s plan to build the ballpark at the Port of Oakland’s Howard Terminal site.
The A’s want Oakland to create two tax districts, including one to pay for soil cleanup, seismic work, utilities, sidewalks, streets and other improvements needed to prepare the Howard The Howard                          Terminal site and the proposed A's ballpark are shown in a rendering supplied by the Oakland A's. (Courtesy of Oakland A's)Terminal site for their proposed $12 billion development, which in addition to a 35,000-seat ballpark includes 3,000 housing units, hundreds of hotel rooms, a performing arts center and commercial or retail space. This proposed project is all bur dead as the A's search for that elusive "Pot of Gold" in Las Vegas. 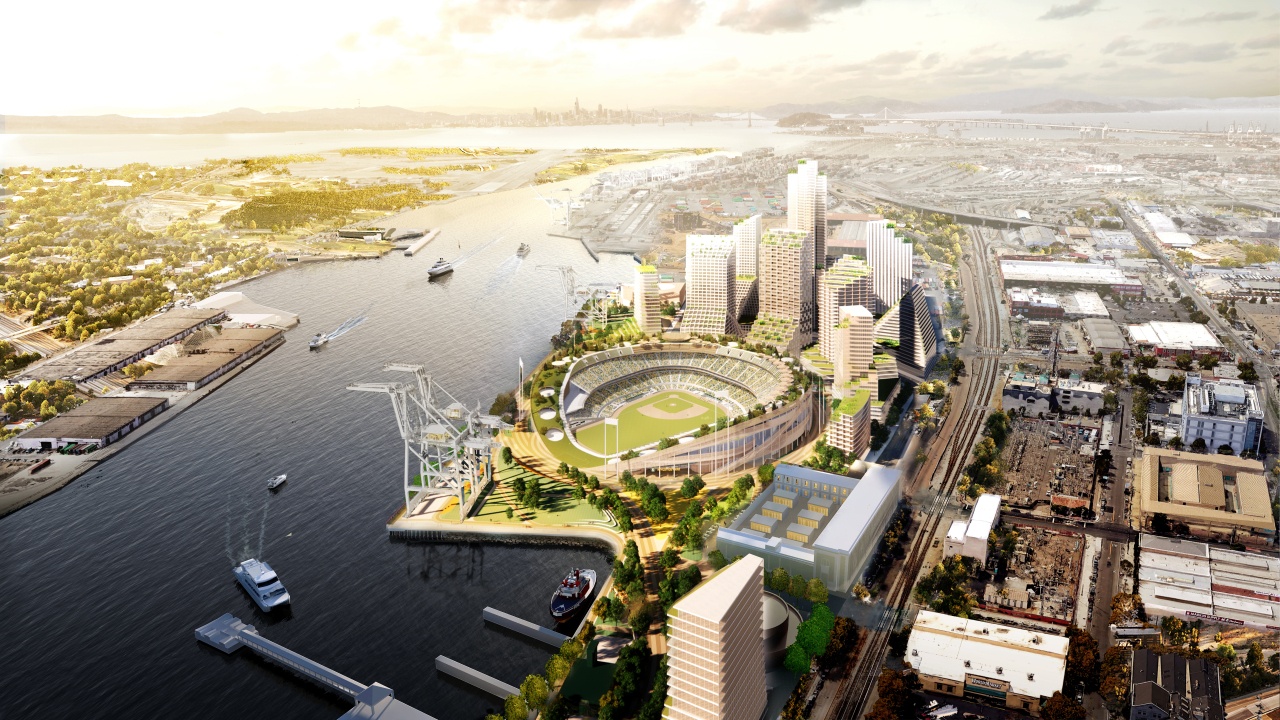 The other tax district, which the county isn’t being asked to support, would pay for overpasses or underground tunnels, bicycle lanes, sidewalks, fences and intersections needed to help fans cross heavy railroad tracks to reach the ballpark.
Land owners in those districts would pay for the improvements through their property taxes.
The A’s have demanded the council approve a non-binding term sheet at that meeting before taking a summer recess to signal the city’s commitment to continue negotiating over the ballpark plan. A’s president Dave Kaval has said if the team does not secure approvals for the project by the end of this year, it’ll leave Oakland.
When so-called “enhanced infrastructure financing districts” are formed, properties within them are assessed, and the tax money from annual increases in their value is funneled directly into project-related uses and affordable housing instead of being distributed entirely to local governments and special districts.
Oakland’s consultant has estimated that the county could receive almost $17 million annually in property taxes over the next 45 years from the Howard Terminal financing district and keep about $6.3 million of it while forking over the rest for infrastructure work.