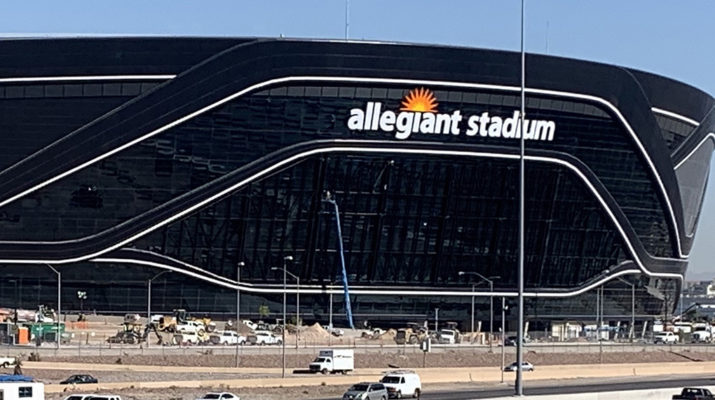 $1.5M in construction liens filed on completed ALLEGIANT STADIUM
Four contractor’s liens totaling $1.5 million have been filed on Allegiant Stadium with the Clark County Recorder’s Office. Liens totaling t $162 million worth of work — totally less than 1 percent of the total cost to build the $1.97 billion, 65,000-seat stadium — hadn’t been paid as of July 15.  A  representative of the Las Vegas Stadium Authority said filing liens isn’t uncommon in Las Vegas.   Lawsuits by contractors not paid in Las Vegas are also common.  Liens have been filed on the stadium by: Reliable Crane Service, Las Vegas, for $265,261. The company said in its June 10 filing that the original contract was for $2.45 million and $2.19 million had been paid.— Derr & Isbell Construction LLC, Euless, Texas, for $456,971. The company said in its June 15 filing that the original contract was for $607,006 and $456,971 had been paid.
When the Allegiant Stadium is fully completed, which will be in October, it will be turned over to the Las Vegas Stadium Authority as its owner. Jeremy Aguero of Las Vegas-based Applied Analysis, which serves as staff of the Stadium Authority.
“Senate Bill 1 as well as the stadium development agreement contemplated this and established a process to work through any disputes that might arise,” Aguero said in an email. “These processes are currently being followed by StadCo (the Raiders subsidiary) and monitored by the authority.”
Liens clouds the real estate titles,  making it difficult for the property owner to sell or utilize it until the lien claim is paid, according to New Orleans-based Levelset, which helps contractors and suppliers get payments on projects.
Typically, anyone who provides labor or materials to property improvements can file a mechanic’s lien if they are not paid.  Liens disrupt the flow of funds on a construction project, it gets multiple parties, like lenders, property owners, and general contractors, involved in making sure the right persons get paid.
The Raiders have received an occupancy permit allowing the use of the stadium, even though some of the finish work has not been completed.    Fans will not be allowed to watch inside the stadium, but the game will be televised.
The Las Vegas Hotel/Casino industry has a habit of not paying their contractors.  During the development of the Venetian/Palazzo Resort I remember walking into District Court and being confronted in the jury box by lawyers representing every contractor involved in the construction of the Venetian/Palazzo Resort
The team hosts the New Orleans Saints on Monday night, the first time Allegiant Stadium will be used for a sporting event.
Visit the Vegas Visitor for Raider News / Raiders 2020 Schedule