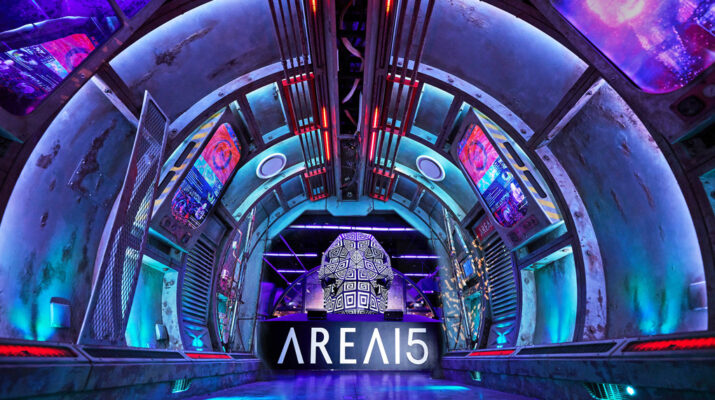 Chris Wink, co-founder of the Blue Man Group ,  is the creator of  “Wink World: Portals To The Infinite”  at AREA15.
“Wink World: Portals To The Infinite” has opened at AREA15. The 15,000-square-foot, multisensory art experience holds space on the second floor of the indoor entertainment district, neighboring Museum Fiasco. The project is something of a spin-off of Wink World’s toy props of Wink’s role as AREA 15’s “director of cool stuff.”
Wink World is located on a 40 acre experimental learning and entertainment facility called AREA15. Located at 3215 S Rancho Dr.,  Las Vegas, minutes from the Strip.  Wink World is designed to appeal to any age, children or grown-ups or childlike grown-ups. The art itself is the tour guide.
Structurally, Wink World is a series of six separate but interlocking experiences, all somehow related to Wink’s fascination with infinity.   The half-dozen “infinity mirror” rooms flash with strobe lighting, dancing and spinning effects, its reflective landscape seeming to go on forever.
“I kind of like the idea of unpretentious art experiences, where you don’t have to feel like you need a graduate degree to penetrate the meaning of stuff,” Wink says from behind his neon-yellow mask. “Just look at it, and get what you get.”
Which, sometimes, is dizzying .  But,  Just don’t miss “Wink World: Portals To The Infinite”  at AREA15,” when you visit Las Vegas….
h4>......For additional events, shows, and nightlife,  on the Las Vegas Strip.