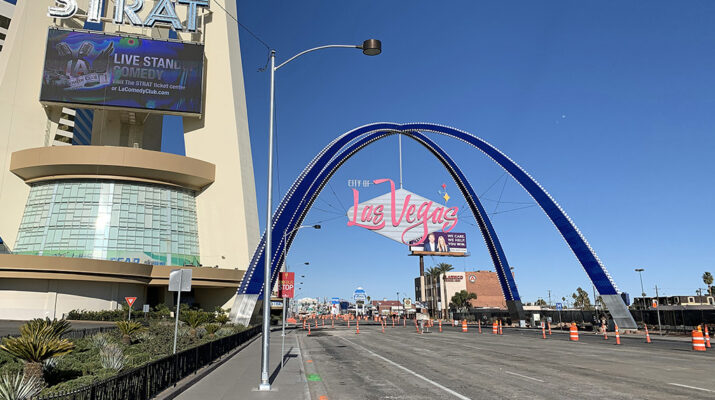 As the Las Vegas Strip Phase A nears completion The next phase of a major multiyear Las Vegas Strip road project is set to get underway this summer.
The $40 million phase B of the now seven-phase project to reconstruct and repave a 5.7-mile portion of Las Vegas Boulevard from the 215 Beltway to Sahara Avenue is slated to begin in July, according to Clark County.
This second phase will cover the stretch from the 215 on ramp near Town Square to Russell Road near the Mandalay Bay.
The contract for Phase B, which is expected to take 450 days, was awarded to TAB Contractors at Tuesday’s Clark County Commissioners meeting.
Phase A, which runs from near Sahara to Spring Mountain Road on the north end of the Strip, is expected to wrap up in September, Kulin said. That portion of the project is pegged to cost $33 million, with $9.4 million coming from the Southern Nevada Water District and $5 million from Resorts World for improvements adjacent to its property.
The project was changed from five phases to seven, but the overall timeframe remains the same as some of the phases will be carried out simultaneously. The entire project, which began in late November 2019, is anticipated to be completed in May 2024.
Aside from repaving Las Vegas Boulevard, the project also includes water main replacements, adding an additional fourth lane where right of way allows, pedestrian enhancements, technology and infrastructure upgrades to the traffic system, adding LED lighting and enhancement to medians.