MLB has given the Oakland A’s green light to explore relocation options.
The Oakland Athletics have approval from Major League Baseball to look for a new home with the "Howard Terminal"  project at a standstill. With their $12 billion waterfront ballpark proposal encountering headwinds, the A’s  dropped this bombshell.

The move brings powerful pressure on Oakland, which lost two of its three major sports teams in the last two years and now confronts an expensive proposal for the A’s to construct a ballpark and surrounding development at Howard Terminal near Jack London Square. The team submitted that proposal only late last month, requesting quick approval before the city council’s summer recess, but city officials so far have not assented to that schedule.
The A’s said in their term sheet proposal they will fund the $1 billion ballpark part of the project that is proposed to also include 3,000 units of housing, 1.5 million square feet of offices, 270,000 square feet of retail, hundreds of hotel rooms, and an indoor performance space.
The team wants the city of Oakland to spend $855 million on infrastructure, in exchange for what it projects would be $955 million in general fund revenue and $450 million in community benefits — but that return would be stretched over 45 years
The current Coliseum lease expires after the 2024 season and the best-case opening date for the waterfront ballpark is 2027.  Increasing the pressure, MLB said for the first time that the Coliseum site, viewed by some city leaders as a potential fallback, is not a viable option. Given the complexity and scope of the Howard Terminal project — and the significant amount of tax revenue the A’s are insisting on to get it built — that suggests the A’s might well follow the Warriors and the Raiders out of town.
The A’s play in an outdated 55-year-old facility they can’t wait to abandon. In recent years the A’s had ballpark plans near Laney College and in Fremont fall through, and multiple attempts at permanent and temporary moves to San Jose were unsuccessful. In a statement, MLB said “the Athletics need a new ballpark to remain competitive.  MLB Commissioner Rob Manfred has in recent years listed Las Vegas as a potential expansion site. 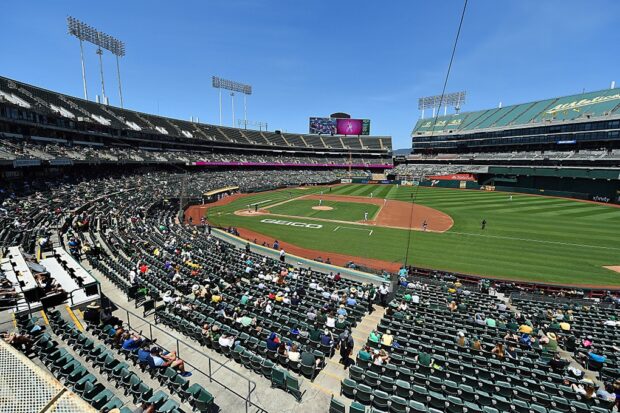 Las Vegas has been an active  suitor for the A’s.  The Las Vegas Aviators currently have a  Player Development contract with the Oakland A's.  Other cities have expressed interest in the A's,  so stay tuned this is an ongoing story....