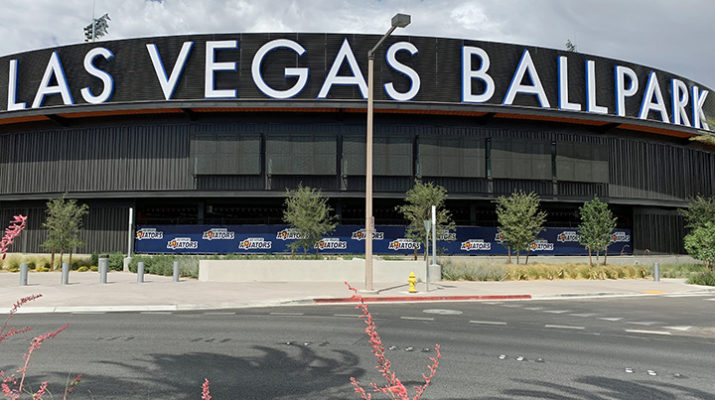 Las Vegas has become an  intriguing sports team landing zone since the Raiders landed a $2 billion stadium in Las Vegas. $750 million of which was paid for by a Clark County room tax. The Raiders Franchise also experienced a $1.5 billion increase in value as a result of the move to Las Vegas. 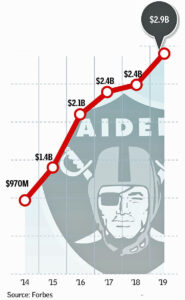 Raiders owner Mark Davis, when asked about the Oakland A's situation, said the news of the A’s possibly relocating doesn’t surprise him. “I hate to say it’s expected, but it’s expected,” Davis said. “It’s what we went through. … The government up there is just not capable of putting a deal together that’s win-win. And that’s all you ever look for is win-win.”
The Oakland A's affiliate in Las Vegas, the "Aviators," play in a $150 million Park that was completed for the team in April 2019. The Las Vegas Ballpark has the largest video board in minor league baseball at 3,930 square feet. In addition the Las Vegas Ballpark, home to the Aviators, has been named the Winner of Minor League Baseball's Triple-A Best of the Ballparks.

LAS VEGAS RECORDED 47 SELLOUTS AND 23 CROWDS OF 10,000+ IN 2019. All this adds to the appeal and  indicates Las Vegas is a great baseball town and a city that supports it's home teams.
If the A’s were to come to Las Vegas that’s another big sports franchise coming into what some would consider a smaller market. The one thing about Las Vegas is as Las Vegas recovers from the pandemic there are 42 million or 43 million visitors a year for a sports franchise to draw from. That’s what’s going to make the Raiders a successful team, it’s going to be the other fans coming in to see the    Raiders as opposed to depending on a lot of locals. Locals will be going. They bought tickets, but the bigger draw will be the 40 million tourists and the same thing will be true for Major League Baseball.
This view is also shared by Golden Knights owner Bill Foley who said, "if the A’s were to relocate to Las Vegas he doesn’t see there being a problem of too many sports teams in the valley, especially with the tourism volume the area sees."
The City of Henderson and MLB discussed a possible major league team moving to Henderson in 2018. The City of Henderson designed a plan to lure the Arizona Diamondbacks to west Henderson in a proposed $1 billion, 36,000-fan-capacity retractable roof stadium. The deal would have been for a 30-year term, with the stadium being publicly owned, exempt from property tax, the plan stated.