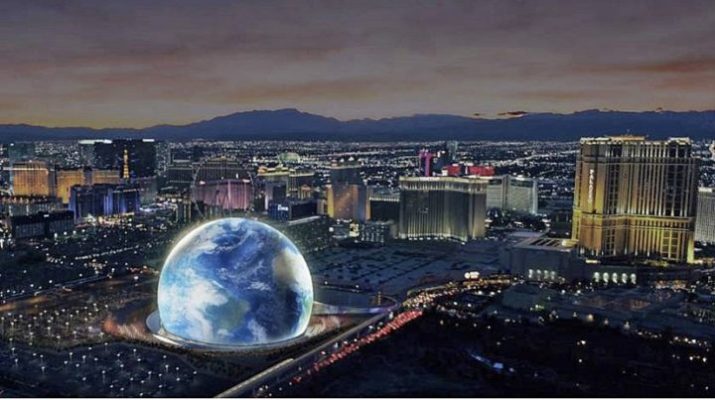 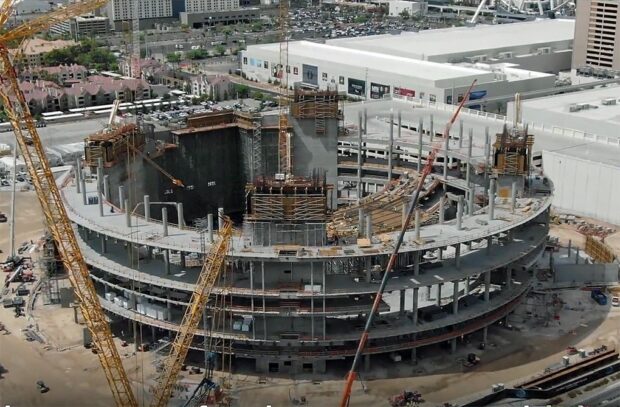 The all but forgotten Madison Square Garden Sphere at the Venetian is on schedule for a  2023 Grand  OPEN. The Sphere will become a major Las Vegas Entertainment Venue.
Construction crews working on the $1.9 billion MSG Sphere at The Venetian project will continue to install the exterior LED lighting system and begin work on interior features of the 17,500-seat performance venue, company officials said Monday.
“We completed the structural steel for the main venue,” Andy Lustgarten, president of Madison Square Garden Entertainment Corp., said in the company’s fourth-quarter earnings call Monday morning.
“Over the next 12 months, we intend to complete the roof concrete and the venue’s exterior facade as we continue to make progress on the interior buildout and pedestrian bridge,” he said. “We also plan to move forward on the building’s exosphere.” 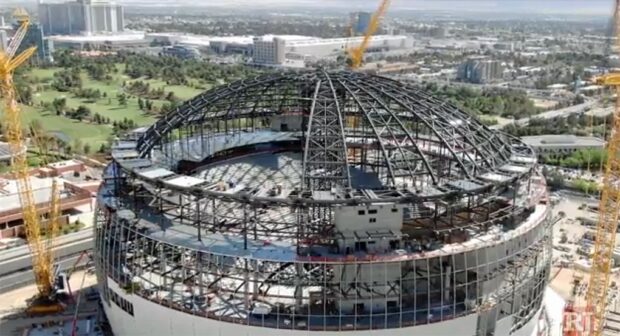 Ninety percent of the structural steel has been manufactured for the project and 95 percent of the concrete is procured, company officials said. The company is keeping watch on its supply chain, especially for alternative sources for semiconductors for the interior sound and video systems.
MSG Entertainment is developing the project, expected to be completed in 2023, with Las Vegas Sands Corp. Sands’ partnership role is expected to be assumed by New York-based Apollo Global      Management Inc. and Vici Properties Inc. when their $6.25 billion acquisition of The Venetian, Palazzo and Sands Expo Center is completed late this year or in early 2022.
“Inside the venue is where we will use state-of-the-art technology to create first-of-their-kind immersive experiences and this coming year we’ll increase our focus on developing this content for Sphere,”  Lustgarten said, "The company has maintained several alliances with sports-betting companies and has partnerships with the New York Knicks of the National Basketball Association and the New York Rangers of the National Hockey League, both of which play in Madison Square Garden."
If sports betting is legalized in New York, which could occur early next year, the company may move forward in developing a stake in gaming with one of the companies seeking a license.
It’s unclear whether MSG or any of its partners would pursue gaming in Nevada.